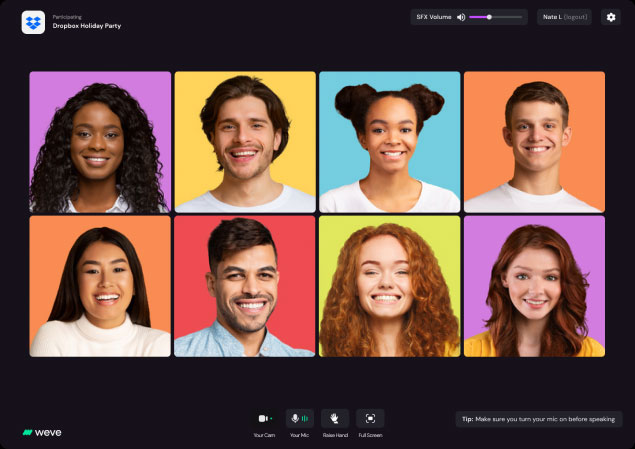 Players type short answers or select multiple-choice. The kind of trivia you know and love! Questions on just about anything for those of you who may be walking around with useless knowledge. Mind-bending riddles, puzzles, photo clues, and more.

a.k.a Fastest Fingers List-O-Rama. The title of a list is given (e.g. “Name the most populous cities in the world”) and teams enter as many of the items on the list as quickly as possible before time runs out.

Where In The World

Global trivia using photos and videos from around the world. Photo or video clues of destinations or cultural touchstones all over Earth with multiple-choice options. Perfect for international audiences and globe trotters.

The Classic Drawing Game. We’ll warm the teams up by having them spend a few minutes creating a picture together based on a prompt. Then we play pictionary proper - one team draws and the other teams race to guess what is being drawn.

Gladiators, choose your GIF! Together, teams search our database of hundreds of thousands of GIFs to find the perfect one that suits the prompt (e.g. “When someone says Beyonce is overrated…”. Everyone votes on the GIFs to determine which is funniest!

We’re not LL Cool J, but we welcome you to the Lip Sync Battle! The Lip-Sync block always starts with a poll where players can choose between 3 songs to lip-sync to and a 4th “Please don’t make me do this” option. The option with the most votes wins. If a song is chosen, we play the song and players are cycled through along with lyric cards - points given for enthusiasm and style!

Get out of your seats for this physically active game! In this themed Buzz-In round, players receive a clue referring to an everyday household item commonly found in homes. Decipher the clue, get the item, and buzz-in first to get the points!

Make a lasting impression. Often used later in the game as a nice breather, each player has a minute or two to drag various props onto their photo to create amusing scenes for the perfect snapshot. Players can download all the photos right from the game!

Straighten that bowtie and take a turn on the Red Carpet. We offer up a silly award like “Most Caffeinated” or “Loudest Typer” and five random players are selected as the nominees. Everyone gets to vote before we reveal the big winner who has a moment to pose with a superimposed trophy and give a short speech to thank their parents.

Two Truths and a Lie

How well do you know your co-workers? One player per team is selected to fill out two truths and a lie about themselves. Then they take turns reading the three “facts” and trying to trick the other teams who are guessing which is the lie.

Your time to shine. In our spotlight rounds, teams select one person on their team to represent them for the activity. Topics include telling their best dad joke, debating the best sing-a-long song of all time, or Adult Show & Tell with their kids or canines!

This mini-game is TikTok-y twist on a scavenger hunt. Each team is tasked with creating the best group video based around a theme. For example, players have to recreate a "space scene." Each player finds objects around them to use in their individual video recording and then the team can mix-and-match the individual recording to create a masterful team creation.

The Price is Right

Come on down! You are the next contestant on the Price is Right! Players get to experience the thrill of being on Contestants Row. We put up an item and players confer with their team to guess the price. The closest to the actual retail price without going over wins!

Each player is tasked with making a 6 second video based on a prompt. Then all the videos are voted on by all the players. Example: 80s dance off - record a video of your best 80s moves.

Search up, down, forwards, backwards, and the diagonal. We put up a block of letters and teams try to find all the words hidden therein before the clock runs out.

If being funny is wrong, you don't want to be right. A sort of caption contest, players try to come up with the funniest wrong answers to different prompts, including: fake definitions of obscure words, fake band names for silly album covers, and fake acronyms. All players submit answers and then we execute a live poll to figure out the best (i.e. silliest/funniest) answer!

Fast-paced and competitive. Each team has a representative in the middle whose job it is to buzz-in first and provide the correct answer before the other teams. Our Buzz-In round is generally trivia based but takes many different forms - Name that Tune, Finish the Lyric, Where in the World videos, Solve the Puzzle, Identify the Movie, Finish the Movie Line, etc.

This activity temporarily scrambles the teams for a section of the game.

Name those celebrities! In this themed buzz-in round, players will see two celebrities mashed-up in one image. The first to buzz-in and correctly name both famous people wins!

Get to know your co-workers. Each player answers a question about themselves (e.g. “What would be the title of your autobiography?”) and teams try to guess who said which answer. For teams that don’t know each other at all, we can play this is a fact recall - players reveal what they answered and then later in the game we challenge teams to recall the answers.

Study the image. Teams are tasked with studying an image for a set period of time. When the time is up, they are asked to answer questions about the image. We hope you were paying attention!

Don't think - just react! In this game, players are brought into the middle one by one and are tasked with instant reactions to silly questions (e.g. “What’s your egg salad recipe?”) or fun directives (e.g. “Hide!”). There are no right answers but the oddest reactions get the most points!

This is our take on the classic carnival game where you shoot a water gun into a clown's mouth to make a horse move across the course to win. Instead of a water gun, players use their own hand movement to move the horse - very silly! Also, it's a relay race - hosts rotate scribes during the race so the whole team needs to be on their toes.

In this mini-game, each team nominates one person to deliver a presentation that they've never seen and doesn't even make sense! It's all about thinking quickly on your feet and finding the humor in an absurd situation. At the end, everyone gives out points based on performance and a hearty round of applause for all.

Let's get ready to rumble!! This mini-game is all about engaging in that classic argument - who would win in a fight? Teams blindly pick one fighter and one weapon or power and then have to debate the other teams why their fighter would wipe the floor with the others. The twist? The imaginary combatants are usually quite silly. Who would win: a penguin in a snow fort or a koala with a selfie stick?

We've taken the classic game of Charades and brought it on to our platform - and then supercharged it! In our version of Charades, all the teams go simultaneously which means there are no wasted moments. One member of each team is in the middle, gesticulating wildly in an attempt to get their teammates to type in the right answer.

In this mini-game, players create the first round of prompts which are then passed to other players to draw. Then the drawings are passed to still more players to describe. Those descriptions are passed to be drawn again. On and on it goes until the big reveal that shows the silly journey from original prompt to final drawing. Great for teams that love to doodle and laugh.

Weve got
GAME.
FUN.
YOUR TEAM.

Try a Demo
Book a Demo